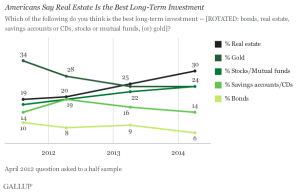 This chart is very interesting. It shows that when Americans are asked their opinion on the best long-term investment, 30% say Real Estate, 24% say Gold, 24% say Stocks/Mutual Funds, 14% say Savings Accounts, and 6% say Bonds.

Check out the video below for a brief discussion of this data. Let me know what you think. 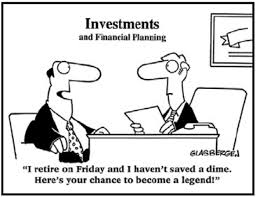 It is highly unlikely that you, as an investor, will fail to reach your financial goals because you miss out on some seemingly incredible investment opportunity which promises mind-blowing returns in a short period of time. It is much more likely, however, that you will fail to reach them as a result of succumbing to your own fear, greed, and insecurity. Over at the Motley Fool, columnist Morgan Housel wrote recently that “(t)he vast majority of financial problems are caused by debt, impatience, and insecurity.” He takes this even further, saying:

People want to fit in and impress other people, and they want it right now. So they borrow money to live a lifestyle they can’t afford. Then they hit the inevitable speed bump, and they find themselves over their heads and out of control. That simple story sums up most financial problems in the world. Stop trying to impress people who don’t care about you anyways, spend less than you earn, and invest the rest for the long run. You’ll beat 99% of people financially.

Later on, in the same column, Housel recommends a simple investment strategy. In doing this, he uses two recent news stories. In one of those stories, the University of California has recently lost more than $100 million on a complicated interest rate swap trade. In the other, Warren Buffet has made great returns over the last several years by buying a farm in Nebraska. These two stories give just one of many examples of how simple investment strategies usually win over complicated yet short-sighted ones over the long term.

Usually, it is better to not listen to the pundits when they tell you that you just have to do something–now. Instead, take the time to understand your own goals and investments, and be willing to trust your own understanding and instincts over the long term.

**Note: For further reading on Warren Buffet’s rationale for buying and holding his farm in Nebraska, go here.